Isn’t it time to change the world?

I am thrilled to be featuring a range of fantastic authors on my blog over the next few months.

Today’s Meet the Author post shines the spotlight on Chris Savory, and offers readers a chance to get signed copies of his paperback, “Confessions of a non-violent revolutionary” with FREE postage! 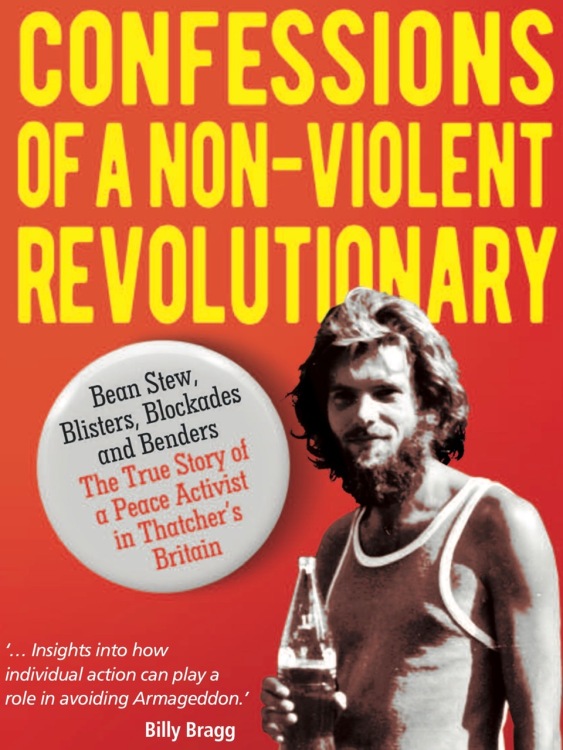 The True Story of a Peace Activist in Thatcher’s Britain by Chris Savory. Clairview Books 2020

Rejecting the privileges that life offers him, Chris Savory seeks to redress wider injustices in society by rejecting future wealth, power and status to follow his ideals. He throws himself into political struggle – living in poverty, sleeping in tents and on floors, braving the mud and cold, surviving on bean stews and wholemeal bread – to the general disapproval of respectable society. His aim? To bring about a non-violent revolution, disarmament and an eco-feminist-socialist utopia!

Oxford University in 1980 opens up a world of opportunity, but the threat of imminent nuclear war pushes Chris to make life-changing decisions. Alienated by the casual superiority of his peers, he abandons essay-writing and sherry with the Dean to embark on a constant round of organising and protesting – peace-camps, marches, illegal direct actions, communes and anarchist street theatre. The triumph of Thatcherism and the defeat of progressive politics leaves him feeling despair, anger and isolation. But having given everything to fight the system, how can he re-enter mainstream society?

At the heart of this memoir is a deeply honest and heartfelt human story, spiced with humour and colourful details of the 1980s’ counterculture. In an age of climate crisis and Extinction Rebellion, Confessions Of A Non-Violent Revolutionary is a thought-provoking and engaging record of a previous wave of mass civil disobedience and an opportunity to learn lessons from the recent history of grassroots political struggle.

‘… Insights into how individual action can play a role in avoiding Armageddon.’ – Billy Bragg

‘Terrific – thoroughly engaging and a real page-turner … wonderfully evocative, thought-provoking and a fascinating window into a world which until recently seemed almost old-fashioned, but now has a particular resonance in our re-politicized age.’ – Jason Webster, author of Violencia, Duende, The Anarchist Detective.

‘Intriguing – a fascinating and racy record of a life which will find many resonances in its readers. Particularly striking is its sense of journey through idealism, disillusion, and the yet remaining conviction that the struggle is not lost.’ – Harvey Gillman, author of A Light that is Shining, A Minority of One.

To get your book NOW, visit the author’s website and see if you can snag a signed copy and get it delivered FREE!

Chris has spent his whole adult life trying to make the world a better place through protest, local politics, working in the education sector, community campaigns and volunteering for social enterprises. He was born in 1961 in Kitwe, Northern Rhodesia and arrived in England aged two. He has subsequently lived in Kent, Essex, Paris, Oxfordshire, Missouri, Yorkshire, Berwickshire, Herefordshire, Dorset and South-West London. He is lucky to have been happily married for 25 years and have two adult stepchildren. He loves ukuleles, singing, watching Bridport Town and Brentford FC, rivers, soft toys, marmalade, the seaside, beer, country music and London. He struggles with chronic depression, exhaustion and joint pains.

Here’s a little factoid- I used to go past Chris’ house very day on my way to school. And never even knew!

I’ve read snippets of this book, and know it’s going to be thoroughly absorbing, poignant, fun and nostalgic. You can find out more at Google Books.

Lord of Deception, Book #1 in the Trysts and Treachery series

Lord of Loyalty, Book #2 in the Trysts and Treachery series

Lord of the Forest, Book #3 in the Trysts and Treachery series